Who we are, what we believe, where
we've been, where we're going, and
why we hope you'll join us.
VISION AND MISSION
VALUES
HISTORY
LATEST RATINGS
COMMUNITY

Bank Independent's vision is to be the bank of choice in the communities we serve.

Our Bank exists to make a positive difference in people's lives.

We will make a difference by:

In order to continue increasing our impact, we must remain a closely-held, independent high-performing organization.

Our values reflect our commitment to build and preserve the solid reputation of Bank Independent. 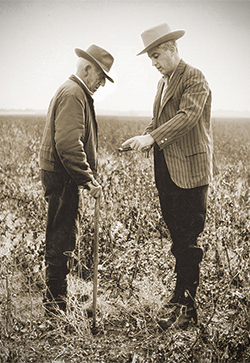 Bank Independent’s roots run deep in the Northwest Alabama area, and like the eighteen communities we serve, our heritage is rich and steeped in tradition.

Our story began in 1947 in Leighton, Alabama, when the area’s only bank unexpectedly closed, leaving the hardworking residents of eastern Colbert County without banking services for the first time since 1903.

A group of Leighton farmers recognized the needs of their community and pooled their resources to open The Bank of Leighton on August 4, 1947. The Colbert County Reporter newspaper reported that “the appreciation of the townspeople was thoroughly demonstrated by the nice deposits made on the first day.”

This new, aggressive organization was renamed First Colbert Bank in 1965. Our bank soon advanced from a state-chartered bank to a national bank in 1967 to become First Colbert National Bank after moving our headquarters from Leighton to Sheffield, Alabama.

In 1975, Board Chairperson Edward Fennel Mauldin organized a group of investors, including some directors of First Colbert National Bank, to charter The Bank of Florence in Lauderdale County, Alabama. At the same time, First Colbert continued to expand its offices in Colbert County.

The two banks merged on December 1, 1982 to become Bank Independent. According to a February 1983 article in the Times Daily newspaper, the formation of Bank Independent “began a new era in banking for the citizens of Colbert and Lauderdale counties.”

Bank Independent continued to build its branch network by opening new offices in Colbert and Lauderdale counties.; In 2002, the bank expanded into Morgan County by opening a loan production office in Decatur, Alabama. Two years later, a similar office was opened in Athens in Limestone County, Alabama, broadening Bank Independent’s footprint to four counties in the northwest corner of the state.

In November 2005, the bank purchased 17 offices of Colonial Bank in locations throughout north Alabama, resulting in 25 offices of Bank Independent operating in 15 communities and six counties. This acquisition expanded the bank’s presence into Lawrence and Franklin counties.

Bank Independent continued to grow with the acquisition of The Citizens Bank of Moulton in December 2008. This resulted in three additional offices in Lawrence County.

In August 2009, the Bank welcomed Interstate Billing Service, Inc. (IBS) to the Bank Independent family. IBS, a nationwide corporate billing service based in Decatur, Alabama, offered the bank a new dimension of growth opportunities, as well as 87 employees.

The Bank expanded into a new and exciting area in July 2014 with the opening of a loan production office in historic downtown Huntsville. Now a full service sales office, this was the 27th Bank Independent office, offering exceptional service to a seventh county. A second full-service office was opened in Madison in 2018.

Today, Bank Independent employs over 600 local team members who are deeply involved in the areas served by the bank. As we enter our seventh decade of continuous commitment to those communities, our team members, leadership and shareholders honor the firm foundation established by the bank’s founding fathers in 1947. Bank Independent will always remain rooted in tradition even as we focus on a future of growth and prosperity.

“#36 in the Top 100 Most Loved Workplaces list by Newsweek” The 2022 Top 100 Most Loved Workplaces® are the result of a collaboration with the Best Practice Institute (BPI), a leadership development and benchmark research company. The results were determined after surveying more than 1.4 million employees from businesses with workforces varying in size from 50 to more than 10,000. The list recognizes companies that put respect, caring, and appreciation for their employees at the center of their business model and, in doing so, have earned the loyalty and respect of the people who work for them.

“Forbes list of Best-In-State Banks” Forbes and Statista identified Best-In-State Banks 2020-2022 based on an independent survey of approximately 26,000 US consumers who were asked to rate banks at which they have or previously have had checking accounts. Participants made recommendations regarding overall satisfaction; they also assessed banks in the following areas: Trust, Terms & Conditions, Branch Services, Digital Services, Customer Service, and Financial Advice.

“Most Loved Workplace” by Best Practice Institute (BPI). Most Loved Workplaces® certify companies where employees are the happiest and most satisfied at work. Bank Independent became certified as a Most Loved Workplace based on its scores on the Love of Workplace Index™, which surveyed employees on various elements around employee satisfaction and sentiment, including the level of respect, collaboration, support, and sense of belonging they feel inside the Company.

We've always believed that "a rising tide lifts all boats." That if we can help the individuals, families and businesses in our communities to thrive, both economically and socially, we will all win. Click here to learn more about our team's commitment to giving back.

Making a positive difference for the families, individuals and organizations across north Alabama.
LEARN MORE